5 Best Cities to Settle in Canada as a New Immigrant 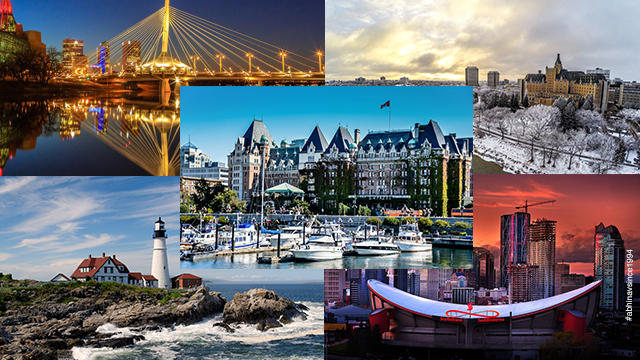 5 Best Cities to Settle in Canada as a New Immigrant

Cumulative factors – including a high standard of living, abundant job opportunities, publicly-funded healthcare, subsidised education and ethno-cultural diversity – ensure that in any discourse regarding immigration Canada unanimously emerges as the prime destination. This is compounded by the fact that 21.9% of Canada’s population is comprised of immigrants, and between 2018 and 2021, Canada seeks to invite 1,000,000 foreign nationals to migrate to Canada.

Mentioned below are some of the most viable Canadian cities for new entrants:

A booming metropolitan hub with lucrative career options (specifically in the IT sector), Toronto is a popular choice amongst immigrants – reflected in the fact that 43% of new immigrants to Canada choose to settle in this city. Around 50% of Toronto’s population is foreign-born, making it the most ethnically diverse Canadian city – South Asians being the largest visible minority (non-Caucasian and non-white) group. Despite being Canada’s most populated city (3 million residents), it has a low unemployment rate (6%) and steadily increasing average household income. However, the cost of living is higher than most other Canadian cities.

With the mildest climate conditions in Canada, Vancouver has a diverse population and growing economy supported by tech industries, international trade, banking and finance, films and TV production, etc. As per the 2016 Census, more than 80% of immigrants who move to the province of British Columbia choose to live in Vancouver. Immigrants – most of whom belong to China, the Philippines, South Asia and UK – form 42.5% of Vancouver’s total population (630,000). The high cost of living and housing prices are balanced by the low unemployment rate (4.1%), high income levels and superior quality of life.

As Canada’s capital city, Ottawa has great public infrastructure facilities and reasonable housing costs. Of the total population (95,000), one-sixth is made up of visible minorities. The federal government is the largest employer, but immigrants can easily be integrated into the educated workforce in healthcare, technology, education, tourism, engineering and science. The city has a low unemployment rate (4.7%) and higher household incomes than the national average. However, extreme weather conditions prevail in the state.

The biggest urban city in Alberta with a population of 1.3 million, Calgary continues to attract immigrants – owing to the broad range of job opportunities encompassing financial services, technology, transportation and logistics, energy, mechanics, mining, engineering, and entrepreneurship. This prosperous city has pleasant weather conditions and a low crime rate. It is also a multi-cultural area where a large number of South Asians, Chinese and Filipinos live. The housing prices are lower than other metropolitan centres of Canada, while the unemployment rate is higher (7.9%).

Montreal has a lower cost of living and cheaper housing prices compared to other metropolitan cities, and is a major centre for art and cultural activities. The population (around 1.8 million) is diverse – more than 34.2% are visible minorities – and engaged in a variety of occupations. In 2017, around 85% of total immigrants to Quebec chose to live in Montreal. The economy is powered by the presence of major Canadian corporations, telecommunication companies, manufacturing industries, pharmaceuticals and more. The average income is only slightly lower than that of people in Toronto and Vancouver, and the unemployment rate (6%) is at par with Toronto. However, the city experiences harsh winters and is largely French-speaking.

The aspirant must determine the correct Canada visa process to pursue – either before or after selecting the ideal destination. To provide a fertile ground for immigration Canada has consistently aimed to develop liberal policies and foster a conducive environment for inclusivity across the country.