Life in Quebec vs. Life in Ontario – What’s the difference? 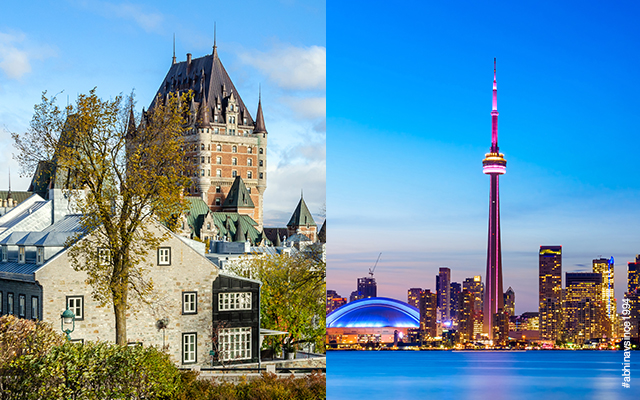 Life in Quebec vs. Life in Ontario – What’s the difference?

Both Quebec and Ontario are hugely popular provinces in Canada, and are also different in unique ways. Both attract hundreds and thousands of skilled workers every year, offering warm, charming and friendly environment to its residents. But what makes these two popular provinces different from each other? Let’s take a look at what it’s like living in Quebec and Ontario:

Cost of Living– Quebec is the most affordable province to live in Canada, featuring the lowest real estate rates in Canada. Price of public transit is lower in Quebec than Ontario, and the free health care and tuition fees are also competitive as per the Canadian standards.

Though Ontario has above average cost of living, it is also affordable to live. Rent for an apartment might range from $700 to $1400 per month. However, options for cheaper accommodation are available as well due to the presence of various universities. Prices of groceries are lower in Ontario as compared to Quebec. Talking about the local purchasing power in the Quebec City, it’s 3.90% lower than in Ontario.

Job Opportunities– Both provinces have tremendous job opportunities for skilled workers. If you can speak French, go to Montreal- it has the best producing industry, mainly dominated by food, transportation, clothing, etc.

Ontario, on the other hand, is the commercial hub of Canada with the maximum availability of job opportunities. Manufacturing and IT are the largest industries along with arts, culture, and journalism.

It is clear to see how both provinces are different in their own way. It completely depends on your preferences and type of lifestyle you want to opt for before choosing where to migrate.