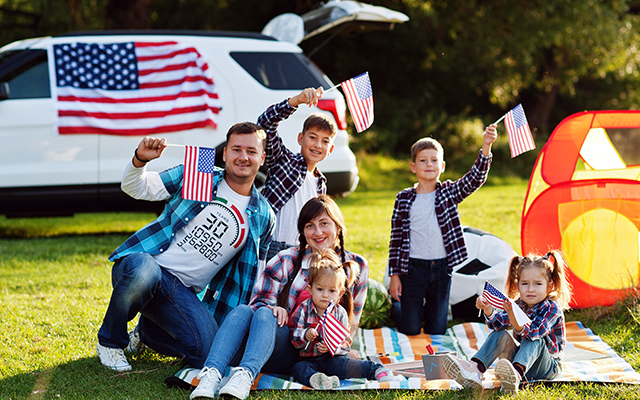 Under US immigration law, family-based green cards are roughly classified into two groups: immediate relatives and family preference, based on the relationship to the US sponsor. To apply for an immigrant visa, also known as a green card, a foreign citizen must have an immediate or closest relative who is either a US citizen or a lawful permanent resident of the US who is willing to sponsor their application (also known as a green-card holder).

The US citizen sponsor initiates the immigration process by submitting a petition on Form I-130 to US Citizenship and Immigration Services (USCIS). Following that, the foreign national offers additional documentation and either go through “Consular Processing” or “Adjustment of Status” to receive a US immigrant visa. When a foreign individual gets an immigrant visa, they have six months to enter the United States.

After arriving in the United States, an immigrant will often acquire a physical green card within a few weeks. Until the immigrant visa is issued, the immigrant may use it for international travel, evidence of work permission, opening a bank account, obtaining a driver’s license, and so on. Immigrant visas are usually valid for six months from the date of issuance.

In some cases, if the immigrant is already in the United States (ideally in lawful immigration status), they do not need to leave. Still, they must apply to the USCIS for “Adjustment of Status” by submitting Form I-485 with supporting documentation and attending an interview at a USCIS office before being granted permanent residence status. In many immediate-relative adjustments of status situations, the I-130 and I-485 packets may be submitted to the USCIS simultaneously or “concurrently.”

Immigrants who are close relatives of US citizens are eligible for an unlimited number of green cards, which means they are not subject to the numerical restrictions or quotas that apply to other family categories and employment-based green cards. Immediate relatives are those who are:

Fiancé(e)s of US residents are also a few steps away from obtaining a green card. However, suppose the fiancé is from another country, and the pair chooses to marry in the US before applying for a green card. In that case, the first step is to apply for a temporary (90-day) visa known as a K-1 fiancé visa. Following the marriage, the immigrant can apply to the USCIS directly for “Adjustment of Status” on Form I-485. The foreign national spouse will be given “conditional permanent residence,” which should eventually lead to permanent residence.

Other family members of US citizens or permanent residents may also apply for US green cards. However, these candidates are only eligible for a restricted number of green cards. They usually have to wait several years for them, depending on where they fall in the following preference groups and where they were born:

The US family member must initiate the procedure by filing Form I-130, Petition for Alien Relative. Following USCIS approval, intending immigrants may have to wait several years before their “priority date” becomes current and can proceed (also following the same process described above).

Each year, 226,000 family-based green cards are granted to applicants from various nations. While this may appear to be considerable, the number of applicants seeking green cards each year is frequently much greater. The average wait period for a “Depending on the visa category and the country from which the immigrant is applying, the “priority date” to become current could range from a few years to a couple of decades (due to per-country limits).

There is no direct route to sponsoring US green cards for grandparents, aunts, uncles, nieces, nephews, and other extended family members. However, you can build a network of relationships so that a more immediate family member can petition for them. A US citizen, for example, might petition for their parents; after getting a green card and then US citizenship, they could petition for their parents, who were the initial sponsor’s grandparents (typically, after a minimum of five years of being a green card holder). However, this method necessitates long-term preparation.

All immigrants (including minor dependents) must meet the eligibility conditions when applying for adjustment status or entering the US on an immigrant visa. If a child is 21 or older when the priority date becomes current, he may be ineligible for an immigrant visa unless he is covered by the Child Status Protection Act (CSPA). Furthermore, if an unmarried child traveling to the United States marries between acquiring their US visa and entering the country, they will be denied entry.

To know more news and updates on Express Entry Program, you can sign up for our free counseling and guidance session at 8595338595 or by mailing at [email protected]