Will immigration is reviving factor in Canada post pandemic?

Will immigration is reviving factor in Canada post pandemic?

Canada, whose primary focus has been the welfare of its people, soon took the steps that valued human life over its economy as the Coronavirus started to spread in the country. Being a stable and wealthy country, Canada’s economy is sure to bounce back once the vaccine arrives to subside the issue of the pandemic. However, there are speculations if Canada’s robust and aggressive immigration will stimulate its economy or will it impact the employment of Canadians. Let us have a look at both the aspects.

When people migrate to Canada, they come with savings and will pump money into Canada’s economy as they will have to spend on transportation, housing, clothing, telecommunication, groceries, luxuries and several other daily activities that will benefit Canadian people and their jobs.

Also, people who will migrate as Entrepreneurs will not only support the Canadian economy but will also create jobs for the local people of Canada. This can also be viewed from the fact that various provinces of Canada have conducted regular draws in the past few months offering people the opportunity to become permanent residents of Canada, even in the crisis situation. 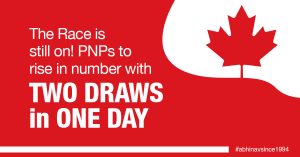 There can be apprehensions regarding the immigration as it may impact the job prospects for the Canadians. In the present situation when unemployment rates are high and to get a job is difficult, immigration can further hurt the sentiments of Canadian public. Therefore, they might not be as welcoming for migrants as they otherwise would be.

The pathway for Canadian economy after pandemic

The two ways that could take Canada’s economy forward are adding more workers to labor force and using these worker in an efficient and productive manner.

One thing that the pandemic has not changed is the demography of Canada. It has an aging population with low birth rate so much so that it has the world’s oldest populations and world’s lowest birth rate. This is not supportive for an economy to grow and to trigger social spending when the costs are expected to rise.

In order to maintain the population and have more people to work to drive the economy, Canada will need more people. One way to address this issue is immigration.

Even if Canada targets the under-utilized talent sources like women, disabled persons, senior citizens, disengaged or less-engaged people including youth and include them with the mainstream workforce, then also it would not be possible to make up for the 9 million baby boomers who will be retired soon. Here, immigration is the only solution for Canada that will play the major role in revitalizing the economy and fulfilling the labor need in the years to come.

Before the pandemic halted the nations across the world, Canada had the lowest unemployment rates in the world. This means that as soon as the virus loses the battle, Canada will get back on producing jobs for all of its citizens. Therefore, it will rise and shine again with lowest unemployment records and flourishing economy with the help of immigrants.